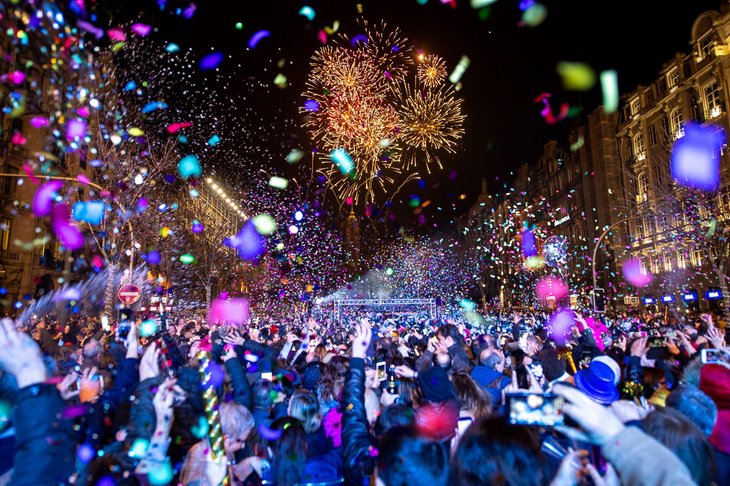 As the end of year closes in and Christmas celebration is just a few days ahead, the Municipality of Porto invites everyone to join in, as of 30th November the year's greatest feast is served.

The Aliados Christmas tree lighting ceremony in 2019 will take place on Saturday, November 30 at 6pm. The tree is adorned with thousands of multi coloured LED bulbs. The tree is set up at Praça do General Humberto Delgado, aka, Aliados Avenues (upper part), in front of Porto City Hall.

But the celebrations kick off earlier, at 3pm, featuring performances, concerts, parades and itinerant choirs, and many surprises that will literally sprinkle joy all over the Invicta.

Also on 30th November, a group of four little tin soldiers will enliven Porto with their music instruments, parading from Rua Formosa, at 3pm, roaming Santa Catarina and 31 de Janeiro Streets and heading to Aliados.

Around 4pm, there will still be time to enjoy a show by the Chilean Mime artist Huenchulaf, at Praça da Liberdade.

Weekends in Porto will thus be filled with amusement and live performances, under the Xmas Programme "Natal a Rir" ["Laughing at Xmas", free translation], bringing all it takes to experience cheer joy this magical season: humour, magic, juggling, acrobatics, music, rhythm and mimic are the ingredients of the live performances from street artists from Chile, Argentina, France, Italy, Spain and also Portugal.

All performances will take place at Avenida dos Aliados, starting at 4.30pm, but the first show, which is scheduled to start at 3.30pm, on 30th November.

The "Natal a Rir" is an initiative of Porto City Hall, via the Municipal Company Ágora - Culture and Sports, and produced by the Cultural Association Gritodovento and artistic direction of Francesco Cerutti Nava.

Porto officially opens the festive season on 30th November with the inauguration of the ice skating rinks as well. The city will have two active natural ice rinks: from 30th November to 12th January, one in Mouzinho de Albuquerque Square (aka Rotunda da Boavista) and another in Praça D. João I.

The Praça de D. João I natural ice-rink opens at 10am and the one at "Rotunda da Boavista" opens at 11am. To mark the opening, the 1st December ice skating and gliding is free during the morning hours till 1pm. Later that day, at 4pm, the performance "Magic on Ice" will delight crowds and it is access free.

In the Rotunda da Boavista, the ice rink is part of the Fantasy square, with ice ramps, merry-go-rounds, magic train, traditional games, mini Ferris wheel and even Santa Claus'Home.

The ice skating rinks will open at 4pm. The rinks are located at D. João I Square and at the Boavista Roundabout, where the Fantasy Square will bring a fairy-tale quality to Porto in this holiday season.

As tradition, this time of year in Porto, markets and fairs are the best getaways for fun and joy. Take a trip with friends or family and find out that little gem you are striving for.

The Mercado da Alegria is wrapped in holiday spirit, at Santo Ildefonso and at Batalha Square. The market will run till 31st December. Circa 40 stalls and stands will offer art crafts, artisanal toys, regional grocery and much more. It operates from Thursday to Sunday, between 10am and 8pm; and from Friday to Saturday, between 10am and 11pm. On 24th December it is open between 10am and 4pm.

Save time to visit the Handicraft and Trade Fair of Porto, at Poveiros Square. This market runs till 23rd December. Expect no less than an array of products: ceramics, linen, wools, wooden, leather, iron and stone materials, as well as traditional games, artisanal soaps, rag dolls, and all kinds homemade souvenirs and liqueurs, by 30 certified sellers.

A novelty this year is the debut of Artesanatus Porto, at the garden of São Lázaro, which runs from 14th to 22nd December, between 10am and 7pm, and bringing to the Invicta the best of traditional and contemporary handicraft.

In addition, the Xmas Market in Bombarda is set up for the three Saturdays before Christmas Eve, on 7th, 14th and 21st December, in the pedestrian area of the Miguel Bombarda, for the first edition of an arts market devoted to Christmas.

The main stage will be set by the "Espelho de Água" - the upper part of Aliados Avenue, where four of the most iconic national artists - Agir, Ana Bacalhau, Irma and Matay - take to the stage to perform the mots known sings of their repertoire, as well as the most popular Christmas songs.

The 30 metre high and 12 metres in diameter Christmas Tree will be lit on 30th November, at 6pm and the holidays begin with a fireworks display at Aliados.

Following the inauguration of the Tree, the "The Lucky Duckies" band invite the audience to journey through the classics of international and national music of the 1920's to the 1960's, also featuring their "Lucky Christmas" álbum, released in 2018.

The Xmas Tree at Aliados is also an enchanted stage

The Xmas tree is already up at Avenida dos Aliados, in Porto and the Municipality of Porto invites everyone to see inside the tree as merry events will bring a free festive trail of events for the younger generation.

Let the Xmas tree guide you through an enchanted stage encountering musical plays, children's stories and a puppet theatre inspired by a legend of the Northern Portugal.

From 1st till 22nd December, Porto offers seasonal fun for the whole family. Saturdays and Sundays afternoons are the perfect times to warm-up the Xmas cheer.

New Year's Eve of magic celebrations at Aliados, in Porto

Porto is quite special at the turn of the year. The city is lit up and squares and streets across the Invicta are dressed up to make this New Year's Eve in Porto a memorable one. Bring your lucky foods, arrive at your own leisure and most of all, enjoy Porto's high-energy atmosphere for celebrating New Year's Eve.

The last day of the year, revellers welcome 2020 at Avenida dos Aliados, in front of the Porto City Hall, featuring incredible live music and entertainment from headlining musicians Miguel Araújo (00.20) and Tiago Nacarato (10.30).

However, the last Saturday of December brings New Year warm-up to Aliados with a special concert by Marta Ren and the Matosinhos Jazz Orchestra for a reinterpretation of her solo album - "Stop, Look, Listen" - which also includes classic favourites.

This will be the inaugural concert in the city's outdoor stage, at Aliados, under the "Concertos na Avenida" cycle.

Save the date for this unique concert, especially arranged for the 28th December in Porto, live at 10pm.The "Stop, Look, Listen" album, by Marta Ren, released in 2016 by the Italian Record Kicks, is a sort of musical ID of this singer from Porto, with soul and funk vibes.

So, grab your nearest and dearest and together welcome the New Year. At midnight on the dot, Porto's night skies will be a blaze of light and colour with a display of stunning pyrotechnics from the City Hall.

DJ's Radiola will guarantee liveliness entertainment into the small hours of the first day of 2020.