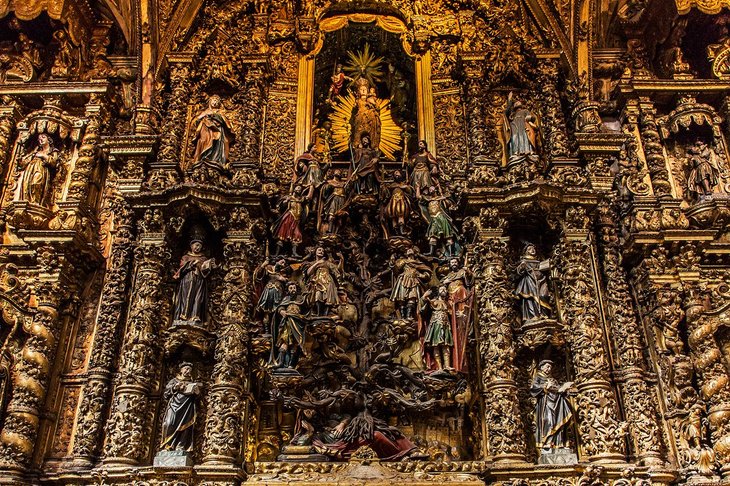 The San Francisco Church is a gothic church located in the parish of São Nicolau, in Porto historic centre. The construction started in the 14th century as part of a Franciscan Convent, and throughout the 17th century, several altarpieces were crafted and the entire church interior was refurbished. The main gilded wood altarpieces are on display in the church.

San Francisco Church is remarkable for its baroque décor in carved gold of the 18th century. The Franciscan priests settled in Porto in the beginning of the 13th century, and in 1233 they were granted a plot to build their church. Disputes with the Bishop of Porto regarding the boundaries of the area and resistance from the religious authorities led to the continuous postponement of the works during the 14th century.

This conflict led to the intervention of Pope Innocent V, who confirmed that the plot belonged to the Franciscans by the papal Bull Doelentis accepimus, in 1244. The construction phase commenced with the laying of the adjacent convent’s foundations and a primitive church, more modest and with a simple one-nave high church.

The church’s main facade features a gothic rose window, richly decorated and crafted. This is the only surviving remnant of the original decoration, and the portal is a baroque work, organised in two levels, where the statue of Saint Francis of Assisi is sustained by two Solomonic columns.

The south gate, facing the river, is a gothic piece. It stands out in the facade and it displays a gable decorated with a pentagram. The opening also features a series of archivolts adorned with high reliefs of mudéjar architecture.

The church has three naves with five bays, with a main nave larger than the side ones. The East side highlights a transept and one apse with three chapels. The Calvary is lighted not only by the monumental windows of the transept’s arms and the main chapel, but also by the small rose window lying over the main chapel with a pentagram shape.

The Church of Saint Francis (Igreja de São Francisco), which is located in the historic city centre, is the most prominent Gothic monument in Porto. The city centre is a UNESCO world Heritage Site since 1996.

It is part of Porto’s landmark monuments and a must see church.