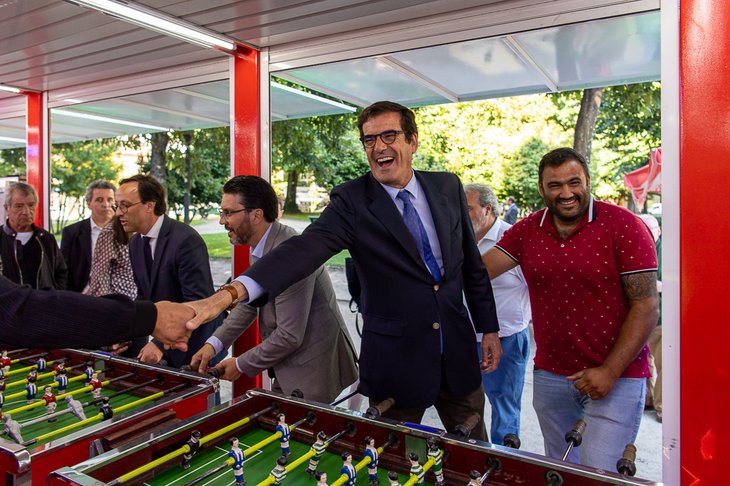 At Rotunda da Boavista, São João can already be lived. The amusement spaces are already installed there, with the usual carousels, bumper cars, table football, stalls with “farturas”, cotton candy, popcorns, “pão com chouriço” (bread with traditional Portuguese sausage) and sardines, in addition to the Ferris wheel. However, until July 3, amusement spaces can also be found at Alameda das Fontainhas, Jardim do Cálem and Avenida D. Carlos I (on Passeio Alegre). It is the city living and vibrating with its biggest party.

The Mayor of Porto, together with the councillor and chairman of the board of directors of the municipal company Ágora, Catarina Araújo, and the rest of the council team visited the amusements installed in Rotunda da Boavista. They were accompanied by the representatives of the Movimento Empresarial dos Itinerantes de Empresas de Diversões e Similares (MEID), Associação Portuguesa de Empresas de Diversões (APED) and Associação dos Profissionais Itinerantes Certificados (APIC).

“Fortunately, after these difficult years we have had, the amusements are back, which is great for the city, for the people and for a sector that has been deeply jeopardized by all this problem”, said Rui Moreira, praising “the action concerted of the three sector organizations”.

Moreover, the Mayor of Porto hopes that everyone will experience the city during these days. “Tourism is in great shape, São João is for everyone, for those who come from surrounding areas, for tourists, it is for everyone”, he stressed, highlighting that the touristic occupancy rates are excellent: “NOS Primavera Sound was extraordinary, from the point of view of attracting audiences. São João will be the continuity of what we want the return to normality to be”.

This year, the amusement spots are spread all over the city. Due to the metro works, there will not be the big concert in Aliados. The mayor believes that “safety conditions are assured, but they depend, above all, on each one of us. We are not replaceable in terms of security, overall, it is a quiet, safe city. We have security forces who will be around. They are not as visible as in other cities, which means we are safer”.

São João returns to the streets, to the neighbourhoods, to the balconies and terraces, to the relatively known corners of the city. This year’s program includes an entire month of tradition and entertainment for everyone. For the night of 23 to 24 it is advisable to use public transport, for better mobility of people and vehicles. There will be some traffic constraints, including on Luís I bridge.