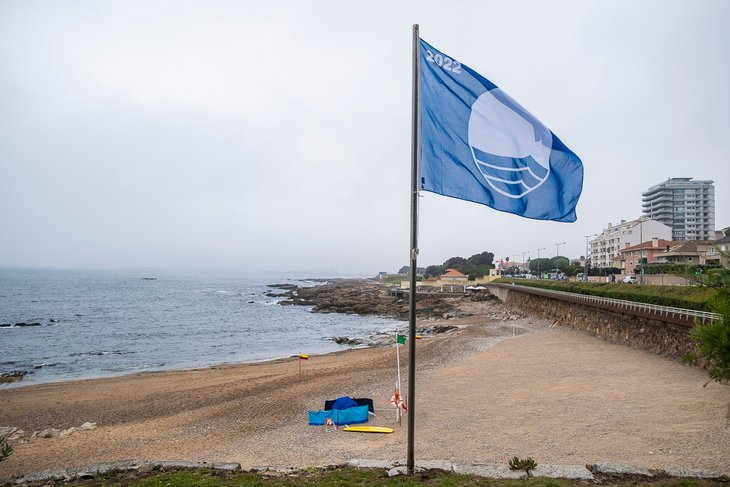 The bathing season began a few days ago on the beaches of Porto and, on Tuesday morning, the most recent Blue Flag awarded to a beach in the city was hoisted. Praia do Aquário now holds the award for environmental quality, increasing the total number of Blue Flag beaches in Porto to nine.

The morning was not inviting for bathing, with a foggy and cool weather, but the moment was still very meaningful: the Blue Flag was hoisted at Praia do Aquário, between the beaches of Homem do Leme and Castelo do Queijo, in a symbolic act that reflects the recognition of excellence conditions for bathing, as well as environmental quality criteria.

Porto thus has, now nine beaches with Blue Flag. “I want to congratulate the entire team. They have been unsurpassed on this path”, complimented the vice mayor of Porto, Filipe Araújo – also chairman of the board of directors of the municipal company Águas e Energia do Porto, entity responsible for the management of designated bathing waters.

“We have new competences within the scope of decentralization” recalled Filipe Araújo. “City beaches have another kind of challenges, and we have a bathing season ahead. A lot of work, analysis to be done”, added the vice mayor of Porto City Hall, underlining his satisfaction at seeing “how people returned to the beaches of Porto”, without resisting to accentuate the differences between the conditions of the beaches in the past and how they currently are.

Accompanied by representatives of several entities, Filipe Araújo also visited the beach, support equipment, installed in new wooden monoblocs, where bathers can find services such as the first aid station. The space also serves as a storage room for lifeguards.

The bathing season on the beaches of Porto began on 10 June and runs until 11 September.