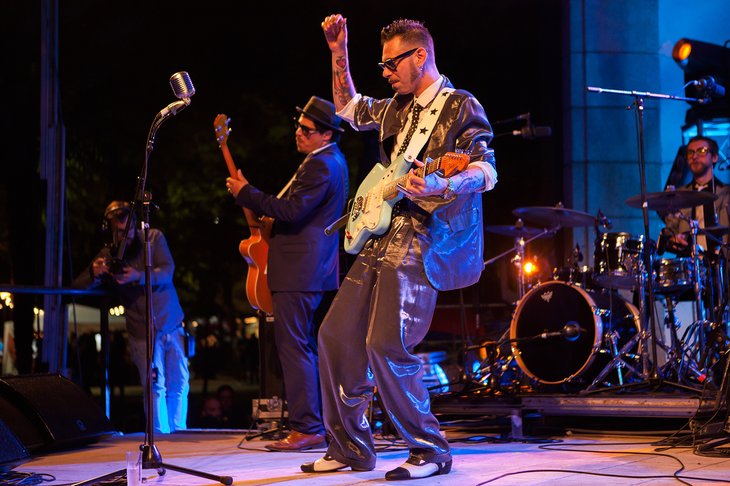 The 5th edition of Porto Blues Fest will take place on the 29th and 30th of July in the gardens of Palácio de Cristal, with a poster featuring national and foreign names and an environmental awareness campaign, to be held for the first time.

The festival returns with a new edition that will take place at the Acoustic Shell in the gardens of Palácio de Cristal on Friday (29th) and Saturday (30th) nights. The highlight of the poster is the return to Portugal of Dr. Feelgood, a British band created in 1971 and, currently, formed by musicians Robert Kane, Steve Walwyn, Kevin Morris, and P H Mitchell.

The band performs on the last day of the festival, the 30th, from 11pm, on a day that also features the national, The Smokestackers (at 6:30pm) and the Brazilian band Alexandre da Mata & The Black Dogs (from 9:30pm).

The day before has as headline Janice Harrington, American jazz, and gospel singer, who closes the first night.

In the first day line-up, a note for the Iberian duo Budda Guedes (Portugal) and Danny Del Toro (Spain), with a concert scheduled for 6:30pm, and the Portuguese project Peter Storm & The Blues Society, starting at 9:30pm.

Tickets are already on sale and are priced at 20 euros (day ticket) and 30 euros (two-day pass).

Porto Blues Fest is, this year, made of greener tones. For the first time, the festival’s environmental concern has a real action, with the intention of reforesting one hectare of forest.

“It was the way we found to offset the carbon dioxide emissions produced by the festival and participate in the joint effort to achieve the goal of zero emission”, reveals Adalberto Ribeiro, from the promoter Trovas Soltas, one of the organizers of the event.

Thus, anyone who buys a ticket for the festival will be contributing to the success of this mission, as one euro of the total cost will be donated to FUTURO – Projeto das 100 mil árvores, a partner of the initiative.

“The festival will be a platform to raise awareness of the need to ecologically rehabilitate burnt, degraded or underused areas, through the proper management of vegetation and the planting of trees and shrubs”, stands out the official.