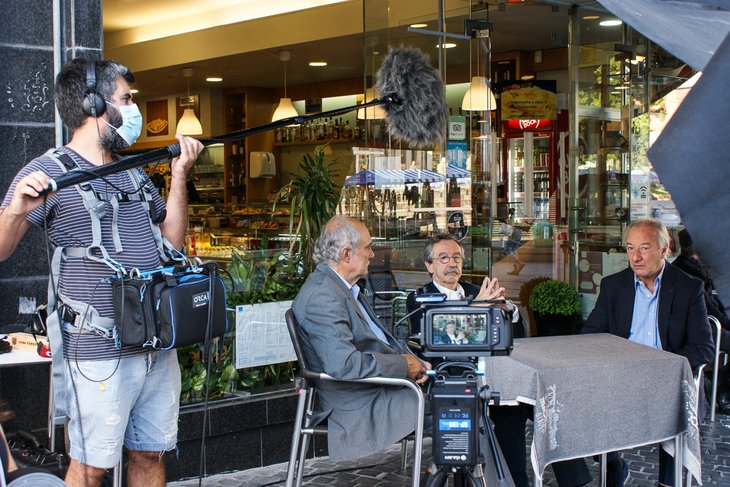 The invitation came in 2019 from a French producer: to film a cinema of your choice in Portugal. The director, from Porto, chose the most iconic cinema in his city: the Batalha. The process is already in progress.

It was at the Il Cinema Ritrovato festival in 2019, during the international premiere of his documentary “Lupo” that director Pedro Lino received a proposal from the French company Kolam Productions: they wanted the director to choose a cinema in Portugal to be part of the documentary series “Mythic Cinemas”, that tells the story of “the most fascinating venues in the world”.

“I immediately thought of Batalha”, the director recalls. “It’s the most iconic cinema room in Porto and it seemed more interesting to choose one from my hometown.”

Born in 1980, Lino was never a regular in Batalha, admitting, however a “mythological connection” with the room: “It’s clear that all of us, born in Porto, know the Cinema Batalha. And I remember watching some movies there when I was a kid. But my main relationship with Batalha is something that I find rather interesting and that, although I don’t know in depth every cinema room in the world, I believe it’s something almost unique: the cinema has merged with the city, it’s part of our collective imagination, it was even adopted by our lexicon with the expression “vai no Batalha”.

According to the director, Batalha is a mythical room precisely because of this merger that results from the fact that the cinema “has followed the entire history of the 20th and 21st century of Porto”.

The reasons for this choice are clear. Alexandre Alves da Costa, the architect responsible for the refurbishment of Batalha, along with Sérgio Fernandez, and also son of Henrique Alves Costa, historic leader of Cineclube do Porto, remembers going to the Batalha practically since he was born, because his parents were connected to the film screenings in Cineclube do Porto”, the director reveals.

Margarida Neves is a descendant of António Neves, one of the founders of Batalha, and current administrator of the company Neves & Pascaud, that still owns the building today.

Batalha’s biography will be conceived from a dialogue between these two real characters and from archive footage and old films from Cinemateca Portuguesa and RTP archives.

There will also be the re-enaction of small anecdotes known to the people of Porto and that involve, in some way, that cinema room.

But the story doesn’t end there. Pedro Lino wants the documentary to continue shooting until the opening of Batalha, “the day when the cinema opens its doors to the public and Porto again”.

“We caught Batalha at a time of change – and that’s another point of interest in the documentary. We are telling the story of the death and rebirth of the Cinema Batalha.”

The documentary, co-produced by Kolam Productions and Ukbar Filmes with the endorsement of Porto City Hall, RTP and Instituto de Cinema e do Audiovisual, is being made by a team constituted entirely of professionals from Porto.