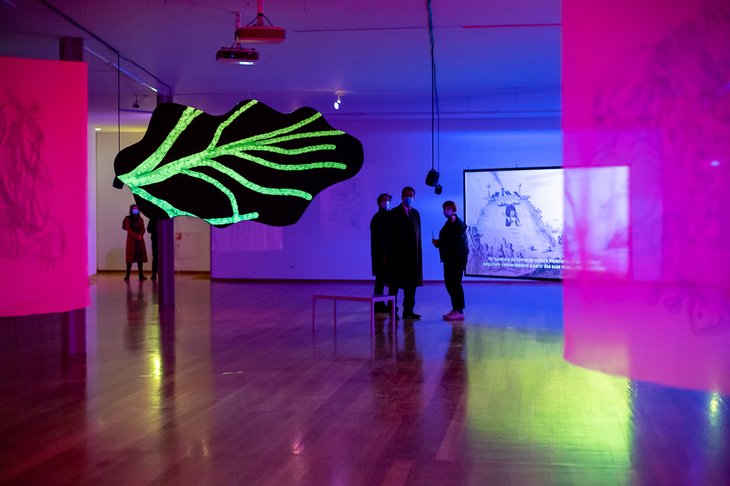 The exhibit “Nets of Hyphae” by Diana Policarpo, presented in Galeria Municipal do Porto (GMP), was considered one of the 10 best exhibits of the European Union 2021 by Frieze. It’s the first time that a Portuguese art institution is distinguished in the yearly ranking of one of the most important and influent contemporary art international magazines.

By invitation of the GMP, the curator Stefanie Hessler, Kunsthall Trondheim director, worked on the project – exhibited between December 2020 and April 2021 – with the artist, seeking to establish speculative relationships between the network of Claviceps fungus and women’s health. Developed, specifically within this project, the works of Diana Policarpo unfold in video, animation, textiles, and sound ambiences and create parallels between the cycle of fungus, the reproductive justice and midwives know how, healers and female farmers in precarity and resistance. Also, through a work with the transfeminist biohacker Paula Pin, focusing on the feminist view of hallucinogens, the artist also conceived speculative parallels between ergotism, the suppression of ancient knowledges and justice in health.

In the Executive meeting this Monday, the, at the time of the exhibit, director of Galeria Municipal do Porto, Guilherme Blanc, explained that this is a very relevant distinction worldwide and “it is something very important for the municipal project of contemporary art as well as for the artist”.

“It is something unique because, there is no record of a Portuguese exhibit to have ever been rated as one of the 10 best exhibits of the year by a magazine like Frieze, There is also no record that any Portuguese artist has been included in a top 10 rank internationally”, he said.

Guilherme Blanc added, also, that the exhibit is part of a continuity work that the gallery has been doing with Portuguese and Porto native artists” where Diana Policarpo, the artist, has a gallery of her own.

The exhibit was also shown in Kunsthall Trondheim, Norway, between February and April this year, in a co-production between both institutions. The homonymous publication – that includes input by Stefanie Hessler and Guilherme Blanc, the curator and researcher Margarida Mendes, the Norwegian historian Rune Blix Hagen, the writer and editor Emmy Bebbe, and of the curator and art student Katrine Elise Pedersen – was released in April with the publisher Mousse Publishing.

The exhibit is part of the GMP program commissioned by Guilherme Blanc, Artistic Director of the Galeria Municipal do Porto between 2017 and 2020 and current artistic director of Batalha Centro de Cinema.

On the list of best exhibits of the year are also the Baltic Triennial, in Lithuania, commissioned by the pair of curators João Laia and Valentinas Klimasauskas, with whom the GMP worked with on the exhibition project “Masks” in 2020.