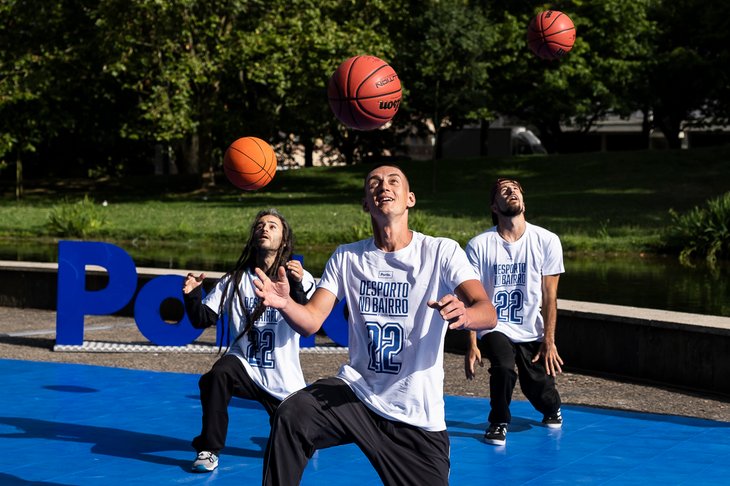 This Summer there will be more options for sports activities and in more neighborhoods of the city. The third edition of the municipal program Desporto no Bairro now features another modality – street basket, which joins breaking, surf and skate – and aims to reach more than 1000 children and young people.

The activities will take place between June and September, concentrated in eight centers and involving 17 neighborhoods. For the first time, the program also reaches the Centro Histórico do Porto, with actions aimed at residents of Fontainhas, Miragaia and Sé.

“Given the very positive results of the last editions – Desporto no Bairro brought together 600 participants in the first edition and about 800 in the second – we decided to reinforce the program with a new Olympic modality and the expansion to new areas”, underlined the Porto Mayor.

“The bet on basketball is the first major news of the third edition of the program Desporto no Bairro. In collaboration with three major clubs in the city, Sporting Clube Vasco da Gama, Académico Futebol Clube and União Académica António Aroso, we have all the conditions created to bring together even more young people from Porto for what is the sport that already registers the highest number of athletes in the training layers: there are more than 800 in the city of Porto alone”, noted Rui Moreira.

The ambition that the municipality places in this third edition of Desporto no Bairro translates into a municipal investment of approximately 125 thousand euros, “the biggest ever”, he stressed. “We made a huge investment in street basket equipment around the city, already thinking about extending this program to street basket”, pointed out the mayor, in statements to journalists, at the end of the presentation that took place at Parque da Pasteleira.

“[O Desporto no Bairro] is a very similar program to Cultura em Expansão. Basically, it is going to reach everywhere in the city, because every place is a city”, added Rui Moreira, noting the social nature of the project: “It has the merit of encompassing not only the sports, but also of giving a strong contribution to their formation as people. It allowed to bring together very different kids, it allowed some to get to know the sea, which they did not know . One of the kids who went surfing was surprised because the water is salty. And he lives in Porto. It gives us a symptom of isolation.”

Opening the session, the councilor for Health and Quality of Life, Youth and Sports, Catarina Araújo – also chairman of the board of directors of the municipal company Ágora – Cultura e Desporto, which promotes Desporto no Bairro – admitted her “huge enthusiasm” for the work already done.

“ Desporto no Bairro began two years ago, in eight neighborhoods of the city, with breaking. Porto City Hall dared to choose this modality, but it dared knowing that the program, too, had to be innovative and disruptive in order to succeed, considering all its specificities”, said Catarina Araújo, noting that “the initiative, despite still having only two editions completed, it has been gaining dimension, both in terms of the number of participants, and considering the neighborhoods in which it is located.”

“Going back to 2020, the first year of Desporto no Bairro, we gave hundreds of young people the possibility to start practicing this sport on a regular and autonomous basis, but also to co-create and present a great show at the Super Bock Arena – Pavilhão Rosa Mota. Even with all the constraints caused by the pandemic, we soon realized that it had a huge growth potential”, she pointed out.

Max Oliveira, coordinator of the program Desporto no Bairro, confessed to feeling “enormous pride” for the already visible results. “I am very happy to continue. This really changes lives. We believe that change comes with love. Those who fell in love with this sport really changed their lives. Today, some of them are even part of the training team”, he congratulated.

“It is a huge pride to belong to this city and to feel that I am part and have some responsibility in a deep change of young people who have a situation like the one I once experienced. This project emerged in a very organic way, at the invitation of Porto City Hall, to design something built from scratch, develop from scratch and adapted to the needs of our neighborhoods”, recalled Max Oliveira.

The third Editions of Desporto no Bairro will take place between June and September. Organized and supervised by specialized teachers, the programmed activities seek to make the participants aware of the benefits associated with sports, as well as offering them moments of well-being and fun.

The program will have three distinct stages. It will begin with initiation sessions to the modalities, focused in eight centers and involving 17 neighborhoods. Later, it will have sports spaces associated with each of the subjects, like MXM Art Center, Skate Park Ramalde, Praia Internacional or the recently opened outdoor sports venues. Finally, this year’s edition will end with the usual show open to the public, created with the children and young people from all centers, as well as instructors and guests.

Third Edition neighborhood list (base of each center in bold)