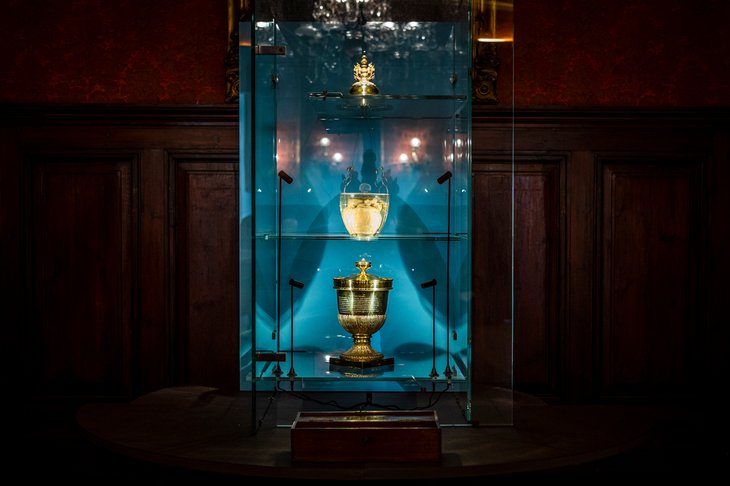 The program designed by Porto City Hall to mark the bicentennial of the independence of Brazil starts next dawn, with the projection of the colours of the Brazilian flag on the Council Chambers building.

This special lighting will remain on for 24 hours, throughout the entire day of Wednesday, September 7, date of the celebration of the independence of Brazil. On the same date, at 6 pm, will take place, in Instituto Pernambuco Porto Brasil, a debate “Desafios sociais”, as part of the Fórum Independência com Integração.

With the homecoming scheduled for Friday, September 9, the heart of King Pedro will once again be on display in Salão Nobre da Irmandade da Lapa, on Saturday and Sunday, culminating with the ceremony of guard at 4:30 pm, in Igreja da Lapa. This ceremony will have a musical intermezzo in the Monumental Órgão de Tubos, with the performance of works by J. S. Bach, Marcos Portugal, and King Pedro IV.

The relic that the king has left to the city travelled to Brazil in August, having received in Brasília with state honours. Rui Moreira, mayor of Porto and the commander of the Municipal Police, superintendent António Leitão da Silva, delivered king Pedro’s heart into hands to the President of the Republic of Brazil, Jair Bolsonaro.

The journey of King Pedro’s heart to Brazil echoed in the international press. It was the first time that the legacy left by the monarch to Porto left the Invicta, provided that, 187 years ago, King Pedro offered his heart to the city that fought alongside him during the war against absolutism.

Between Saturday, September 10, and Monday 12, the showing “D. Pedro IV: Um coração, uma vontade” will take place, in the exhibition room at Irmandade da Lapa, in a calendar that will also mark the death of the monarch, on September 24, with the Coro Polifónico da Lapa, Banda do Exército (Porto posting) and Filipe Veríssimo (organ), under the direction of Captain Artur Cardoso, with the performance of works by Wagner, Caccini, Elgar, Gregson and King Pedro IV.

The birth of King Pedro, on 12 October, is also included in the cultural program with a new performance by the Coro Polifónico da Lapa and Orquestra D. Pedro IV, under the direction of Filipe Veríssimo, performing works by Marcos Portugal and King Pedro IV.

From 23 to 25, the MIMO Festival will take place and two books will be presented in November, ending the year with the exhibit “Pedro, a independência do Brasil e o Porto”, which will open on December 1 and runs until 31 March 2023.

“We tried to [have] a versatile program, it could not be only one side of the story, it could not be Brazil seen only from Portugal; it had to also be the presence of Brazil here”, said the mayor of Porto, Rui Moreira, quoted by Lusa.

Recalling the “historical Connection (…) very relevant of Porto to Brazil, not only through king Pedro”, but also of those who, living in the area of Porto “emigrated to Brazil”, the mayor underscored that the aim was to achieve a “suitable framework”.

“We base this on Culture. There cannot be a guardianship relationship here (…). The important thing is that, there are 200 years of a celebration between two adult nations, two democracies and, in this sense, we seek this diversity”, he concluded.