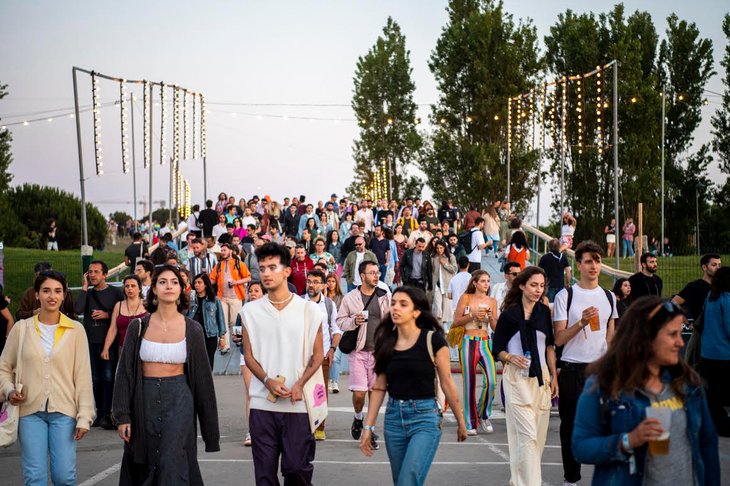 Unlike the biblical text, in the case of NOS Primavera Sound, rest came to the end of the third day. Festivalgoers attended three days (and nights) full of music, on the comeback of the event to Parque da Cidade, after the years of pandemic – according to the organization, the venue received 100 thousand visitors. The weather helped, not sparing in the sun and heat, and at the time of farewell a “see you next year” was in the air.

One thing was common to young and old, newcomers and repeaters, at the end of the 2022 edition of NOS Primavera Sound: happy faces on tired bodies. The comeback of the event – which had been held for the last time in 2019 – to Parque da Cidade caught many festivalgoers out of shape, so to speak. The pandemic prevented the “training”, but the muscles memory helped when it came to enjoying live concerts, enjoying music, and sharing emotions.

The thirst of the waiting imposed by the pandemic was satisfied in a three-day musical banquet in Parque da Cidade. The variety of the poster attracted a diverse audience, with more than two thirds of visitors attending the event for the first time, according to data from a study conducted at the festival grounds by ISAG – European Business School and the Centro de Investigação em Ciências Empresarias e Turismo da Fundação Consuelo Vieira da Costa (CICET-FCVC).

One of the newcomers was the child who, on her father’s lap, sat on the grass, waiting for another concert to begin. A symbolic passage of testimony and, probably, the beginning of another music-loving fidelity relationship with NOS Primavera Sound.

Age is not an impediment, nor a rupture of ligaments playing football. A spectator told Porto. that a “Neymar style trick” left him on crutches but didn’t stop him from going to the festival. Not far from there – a Sevillana with a beard?! The wedding is scheduled for within a month, in Valladolid, and the bachelor party was the excuse for visiting Porto. The NOS Primavera Sound poster was an extra.

It was up to the animated characters of the Gorillaz, headliners of the last night of NOS Primavera Sound 2022, to close the night on the NOS stage. Damon Albarn and his band set the crowd on fire one last time, giving the dancing audience the hits from their repertory, until the final apotheosis with “Clint Eastwood”.

In the natural amphitheatre made up of an outdoor dance floor in Parque da cidade, the British coloured the night, with the dominant pink in Albarn’s outfit contrasting with Beck’s yellow Panama, who joined them on stage for an extraordinary act. It was not the only surprise: Little Simz also made an appearance, after his concert on then Cupra stage.

Hours earlier, the North Americans Interpol had summoned their fans for a reunion, in what was the third act of the Porto festival, after 2015 and 2019.

Rock set the tone for the final musical journey in Parque da Cidade. On the NOS stage, at the begging of the night, Dinosaur Jr. were awaited by a few dozens of fans, who insisted on securing the best place, by the grid that separates the audience from the stage. And the American band did not disappoint, despite the setbacks: “Our instruments were lost at the airport, they ended up in Italy! We are playing with borrowed instruments”, said Lou Barlow at the beginning.

Later, the Brazilian drag queen and LGBT+ activist Pabllo Vittar performed on the Super Bock stage. With their cell phones held high, to record every moment, a considerable number of enthusiasts gathered to watch the show offered by the artist with flying blond braids.

Beck and Pavement had been the headliners of the second day of this edition of Primavera Sound, after a start marked by the biggest affluence ever in the venue, hitchhiking to Nick Cave and the Bad Seeds’ third concert at the Porto Festival. More than 35 thousand people passed through Parque da Cidade on Thursday, in a reunion with the great summer festivals.

The curtain has fallen on Primavera Sound 2022 and the countdown to the next edition has begun. It is not a “goodbye”, it’s a “see you next year”.

Festivalgoers from over 30 countries

The three days of NOS Primavera sound brought festivalgoers from 33 different countries to Parque da Cidade, with emphasis on Spain, United Kingdom, Germany, France, Italy and Brazil, the USA and Switzerland as the main countries of origin, concluded the aforementioned study. In total, 37% of the audience were of foreign nationality.

The same study shows that, among the foreigners and residents outside Porto Metropolitan area, 87% travelled to the Invicta especially for NOS Primavera Sound. In this way, NOS Primavera Sound – which, according to the organization, received 100 thousand visitors – generated a global impact of 36,1 million euros, as determined by the study developed by ISAG and CICET-FCVC.

The festival that marked the comeback of major music events, after the most severe period of the pandemics, was also a return for 31,2% of the public, who had already been present at least once in NOS Primavera Sound. There were even 13% of “record holders”, who since 2012 had never missed an edition.